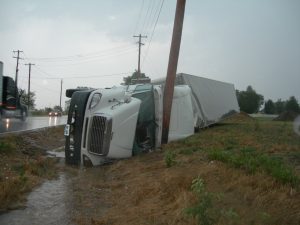 Florida Rest Stop Robbery? While driving a refrigerated box truck along Interstate 75, a drowsy Florida truck driver had the peace of mind to pull over to catch some zees at a rest stop. Sadly, what he caught was a beating by two individuals that apparently set out to rob both him and his cool cargo. After being dragged out his cab half asleep amid the morning dew, he was not only severely beaten but also shot in the shoulder, according to his testimony and reports from the Collier County Sheriff’s Office. Thus far, investigators have been able to verify that the truck cargo area had been searched by the aggressors, but unsure if anything was stolen. Though the victim has not released any public statements, he has been released from the hospital and recovering from his personal injuries at home. No suspects have been arrested and police are appealing to possible witnesses to provide any leads.

If you, a loved one, or family member has suffered personal injury from aggravated assault or battery, the Perazzo Law Firm urges you to contact our Miami office Online or Call (786) LAWS-411 to a Free initial consultation to discuss your legal right to personal injury claims.

THE PERAZZO LAW FIRM – DEDICATED TO PUTTING YOUR INTERESTS FIRST.