The best car accident lawyers agree that most traffic accidents occur at intersections. In Miami, the Perazzo Law Firm’s staff of Personal Injury Lawyers understand intersection accidents and the sorts of injuries drivers and passenger suffer following a crash, which may include head-on, rear-end, and side collisions. 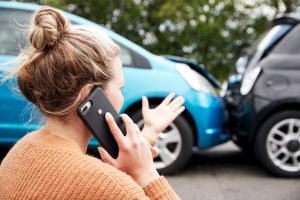 Drivers that are either stopped at an intersection or approaching one, are equally at risk of being involved in a traffic accident. In Miami, Jonathan Perazzo, personal injury lawyer and founder at the Perazzo Law Firm, together with his staff, have ample experience dealing with accidents that occur at intersections, and most often those which suffer the greatest losses are those that were in no way at fault for the accident. For example, a driver maybe stopped at an intersection waiting for a red light to turn green. Suddenly, another driver may attempt a left-hand turn and crash  head-on into the motorist at the light. It happens. Stopped drivers are crashed into regularly while waiting for a green light at intersections, waiting to turn, and even with a steady green light. Sadly, intersection accidents such as these, usually result in physical injury, which most likely will require medical care, either through an evaluation of any injuries sustained in the accident, or physical therapy to treat the common injuries, such as cervical, thoracic, and lumbar injuries. The Perazzo Law Firm highly recommends that car accident victims, including passengers, contact their Miami-Dade law offices ONLINE immediately after an accident to help make sure medical bills are covered and the accident victim receives the treatment he or she deserves as compensation.

WHY DO PEOPLE CRASH AT INTERSECTIONS?

Some of the main reasons include:

What Happens after an Intersection Accident?

Depending on the severity of the intersection accident and the injuries sustained, the authorities will normally arrive within minutes of the accident. Witnesses are quite common at intersection accidents, depending on the time of the accident. Jonathan Perazzo strongly urges car accident victims, especially passengers injured in accidents, to gather eye-witness testimony by having them give a statement to the police officer reporting the accident, or have them give you their contact information. Gathering eyewitness testimony is fundamental when fault is not entirely evident. Sometimes drivers crash at intersections and claims that both of them crossed the intersection with a steady green light, or that the other driver failed to yield right of way. Fortunately, but not always, the final resting point and the damages to the vehicles help reveal which driver was ultimately at fault. However, sometimes this method of establish fault after an intersection accident does not always carry out lot of weight in a court of law should the claim merit a trial. Most often, settlements following an intersection accident can be reached without having to go to court, which could become very costly and time consuming for all parties involved.

See: WHAT TO DO AFTER AN ACCIDENT

See: WHAT HAPPENS IF I AM A PASSENGER INJURED IN AN ACCIDENT?

Injuries after an intersection accident may include:

A devastating five-car accident at NW 183rd and 38th Court resulted in two dead and various injured in Miami Gardens. Several vehicles were flipped over, with passengers and drivers ejected onto the street, sidewalks, and residential driveways. The severity of the accident sent several people to the hospital and made police have to block off the scene of the accident as bodies lay scattered about and rescue crews placed accident victims into ambulances. The cause of the multi-vehicle intersection accidents is being investigated to determine which of the motorists was responsible for the accident and whose insurance will cover the injuries and losses sustained. In Miami, the Perazzo Law Firm attorneys remind accident victims that Florida motor vehicle owners carry vehicle accident insurance to cover medical expenses through PIP coverage. CONTACT the Perazzo Law Firm NOW for a FREE initial consultation and  ZERO OUT-OF-POCKET FEES to clients until their insurance claim for compensation is settled. See INSURANCE POLICIES FOR FLORIDA MOTORISTS

The Importance of a Dash Cam

“After an accident, your dash cam footage can be worth a million dollars,” Jonathan Perazzo of the Perazzo Law Firm in Miami-Dade. 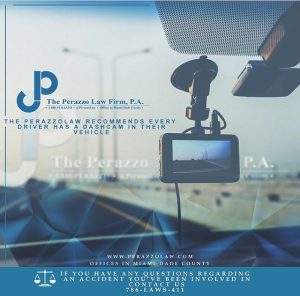 Driver fault following a traffic accident that results in personal injuries, may sometimes be difficult to prove without eye-witness testimony or nearby camera surveillance footage. Thus, an insurance claim for compensation to cover personal injury, damages, or other economic losses may be unsuccessful or fall short of covering your losses. In Miami, the personal injury car accident attorneys at the Perazzo Law Firm, understand that having a dash cam on your vehicle can help improve the potential for establishing fault and help pave the way for a successful insurance claim as well as free you of fault for the incident. A dash cam can also protect you from an increase in your insurance premiums after an accident and some insurance providers may offer a discount if you have a dash cam installed in your vehicle. This is all made possible because a dash cam may be able to capture the vehicle accident and show which driver was at fault or what led to third party injuries and losses.

How does a dash cam work?

Mounted on your vehicle’s dashboard or behind your rearview mirror, it records what is heard and visible as your drive. The Perazzo Law Firm reminds drivers or motor vehicle owners that according to Florida Law, dash cams may not be placed where they obstruct the driver’s view, such as within the sweep of driver’s wiper. Dash cams may be used to record what is happening on the road ahead as well as within your vehicle, not only to help establish fault, but for many other purposes. They usually turn on and off when you start your engine and record while you drive. Thus, they are practical to have because they basically operate themselves to help protect you in the event of a traffic accident. Furthermore, you can set up your dash cam to record when you are parked and with the engine off to protect against vehicle theft. However, for the dash cam to record while parked, you will have to connect it to your vehicle’s battery when in Parking Mode. Most dash cams can record for as much as two hours, depending on the GB capacity of the Micro SD card, which will begin to automatically overwrite previously recorded footage. A 128GB memory card can hold as much as 19 hours of footage while behind the wheel of your vehicle. The Perazzo Law Firm highly suggests purchasing a dash cam, which can range from $60 – $150 depending on the model and features. This is a small price to pay for the added piece of mind and legal protection against a lawsuit following a traffic accident.

In Miami, contact the Perazzo Law Firm NOW for a FREE initial consultation and ZERO OUT-OF-POCKET FEES* to our Clients.