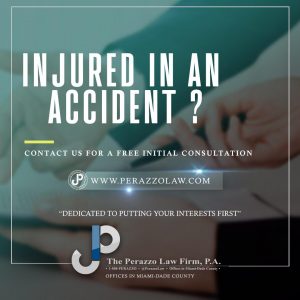 The Miami Car Accident Lawyers at the Perazzo Law Firm are aware of the questions typically asked after a car accident involving drunk drivers in Miami-Dade, Broward, and Orange County.

What role does car accident insurance play after an accident involving drunk drivers?

Drunk drivers are behind the wheel around the clock in cities around the world. They are hard to stop until they are involved in an accident, usually an accident that involves personal injuries to innocent drivers and sometimes, pedestrians. Many times, sadly enough, drunk drivers cause accidents that end in fatalities, not only to other drivers, but the passengers inside the vehicle they are driving drunk.

But what are the laws governing insurance claims for compensation?

Firstly, it’s important to determine who was at fault for the accident. Even though an intoxicated driver is behind the wheel, does he or she cause the accident. A drunk driver may be waiting at a red light and get rear-ending by another driver that fails to notice stopped traffic ahead because he or she was on their cell phone reading or send a text message.

A constitutional ballot initiative presented by Make It Legal Florida was ruled misleading. Attorney General Ashley Moody ruled against the ballot after asking the justices to inform if the initiative would be fitting for a future ballot. The proposal by Make It Legal would have allowed Florida voters to determine if to permit Floridians, aged 21 and older, to possess and consume as much as 2.5 ounces of marijuana. The sponsor behind the initiative had raised $8.2 million for the effort, which is supported by Florida medical marijuana industry.  Additionally, Make It Legal Florida had also gathered over 556,000 of the 891,589 signatures necessary so that the measure can make the 2022 ballot. The initiative would have needed 60 percent of the vote in order to be added to the state Constitution had it made the ballot. Make It Legal Florida needs to redraft an entirely new amendment if they expect to make a future ballot. The lawyer representing Make It Legal, George Levesque, submitted a request for comment to the organization’s chairman, Nick Hansen. However, the requests for comment were not responded to by Hansen. In an unsigned opinion, five of the seven justices pointed out the use of the word “permit” in Make It Legal Florida’s initiative ballot summary. The justices contended that the amendment failed to effectively inform Floridians, that marijuana possession and consumption would remain illegal at Federal level despite being allowed under state law. “A Constitutional amendment cannot unequivocally ‘permit’ or authorize conduct that is criminalized under federal law,” Canady wrote. “A ballot summary suggesting otherwise is affirmatively misleading.” Matters such as these have been presented before the Florida Supreme Court on several occasions. According to Canary, when an amendment legalizing medical marijuana onto the 2016 ballot was being considering, the initiative supporters were able to steer clear of this snag. Ben Pollara, who ran the 2016 medical marijuana campaign, stated that Thursday’s decision by the Court highlighted the body’s rightward lean under Gov. Ron DeSantis. Three Court justices, all appointed by DeSantis, voted to strike Make It Legal Florida’s initiative from the amendment. Both the Florida House and Florida Senate filed briefs opposing the initiative. In 2021, New Jersey, New York, Virginia and New Mexico have made marijuana consumption legal, with at least 17 states and Washington D.C. legalizing its recreational use.

The accident situations above occur when vehicles become out of control for one of many reasons. The personal injury staff of lawyers handling insurance claims for compensation from car accidents, provide professional insight into why Florida motorists lose control of their vehicles and crash.

WHAT CAUSES A VEHICLE TO LOSE CONTROL?

The car accident lawyers at the Perazzo Law Firm, understand that modern. high-tech vehicles rely on much more than driver safety and responsibility behind the wheel given the sophisticated software applied to optimize modern vehicle features. For that reason, when the computer system and software in modern vehicles malfunctions, motorists may be unable to do anything to prevent an accident when their vehicle is out of control.

Faulty Airbags that cause vehicles to lose control

Though not a novelty to today’s modern vehicles, airbags are constantly evolving through advanced software applied to their deployment upon vehicle impact or collisions. For some time now, airbags have relied on computer software technology to determine deployment in  cars and trucks. However, faulty airbag software can cause an airbag to deploy on its own and for no apparent reason. When this occurs, the person behind the wheel of the vehicle who experiences a self-deploying airbag will almost certainly experience serious bodily harm that may result in loss of consciousness and result in the vehicle losing control. When an airbag deploys unexpectedly, airbag accidents may include facial injuries, which place self-deploying airbags as one of the main reasons for motorists losing control while driving. If you have suffered injuries from a self-deploying airbag, consult an experienced personal injury lawyer at the Perazzo Law Firm for legal advice on filing an insurance claim to cover personal injury, damages, or losses from a faulty airbag.

Mechanical failure and auto parts defects that cause vehicles to lose control: Poor maintenance of a motor vehicle can cause tires to blow-out, brakes to lock, and front axels to fall off. When any of these situations occur, a vehicle travelling at high speed will surely spin out of control and crash into other vehicles or objects. Tire, wheel, and front-end maintenance should be top priority for vehicle operators.

Tire Blowouts: When a tire blows out, especially the front tire, the vehicle will be naturally, through the laws of physics, be pulled towards the side of the blow out. A very common reaction by drivers is to hit the brakes. This is a big mistake and the main reason a car will spin out of control. It is recommended for a driver who experiences a front tire blowout, to maneuver the vehicle by firmly grasping the steering wheel and lead the car in its natural direction while slowly applying the brakes. When safe to do so, move the car off the roadway.

Brake Failure: Sometimes a vehicles brakes will not work. This is simply because of poor maintenance by the vehicle owner or poor services by a mechanic. Brakes need to be checked every six months to safeguard against a potential accident that involves brake failure. In the event of squeaking, grinding, or if the brake pedal hits the floor upon applying pressure, vehicle operators need to get their brakes serviced. Brake lines, the emergency brake, and brake fluid levels and the container should be inspected as well. When a driver needs to stop his/her vehicle and the brakes don’t respond, the motorists will lose control and collision will surely follow. At speeds, brake failure can result in a multivehicle accident that causes serious personal injury, damages, losses, or wrongful death. The Perazzo Law Firm in Miami-Dade recommends having your brakes and braking system inspected twice a year or upon any irregularities detected when applying your brakes.

Front-End Breakdown: Many motorists neglect the importance of their vehicle’s front-end and the dangers behind operating at high speeds without regular inspection. This can include taking the car to a mechanic to check that the front bumper won’t fall off or making sure your front axle won’t break off at high speed on the highway. Older vehicles that have received poor maintenance on behalf of owners or those vehicles serviced by negligent mechanics can lead to serious collisions such as rollovers when the front axle breaks off the tire.

Heart Failure and Emergency Medical Conditions: There are drivers that experience strokes or brain seizures while operating their vehicles. In Miami, when a health emergency event like this happens, the driver may faint or become unable to maneuver the vehicle safely amid traffic. On occasion, a motorists will fall asleep as a result of over-medication or fatigue. When this takes place, the unconscious driver will regain consciousness when crashing.

Drunk or Intoxicated Driving: Alcohol and illegal drugs can cause drivers to lose control of their vehicles. Driving under the influence of drugs and/or alcohol is the leading cause of traffic accidents in the U.S. Drugs and alcohol may result in an out of control vehicle. The Perazzo Law Firm strongly suggests that motorists refrain from drinking illegal quantities of alcohol or consuming drugs when driving on Miami roadways, avenues, and streets.

WHO IS RESPONSIBLE FOR AN ACCIDENT CAUSED BY AN OUT-OF-CONTROL VEHICLE?

No matter of fault, the owner of the registered car that lost control and caused bodily harm or property damages to third-party victims, is bound by Florida Law to carry PIP and PD insurance in the event of an accident. Some motor vehicle owners carry more complete insurance policies (see Insurance Policies for Florida Motorists) which will help cover more extensive costs from bodily harm or losses to victims. If the driver whose vehicle lost control is at fault, a personal injury lawyer will be able to determine the cause of the accident and whether the vehicle suffered a mechanical flaw that resulted from third party negligence, such as a part’s manufacturer or mechanic.

Depending on the kind of car accident coverage, which can range from PIP to Bodily Injury to Umbrella insurance (see Top Insurance Policies for Registered Vehicle Owners in Florida), the accident victims may be covered. Check with your insurance provider to find out about how much coverage you have in the event of an accident that involves a drunk driver.