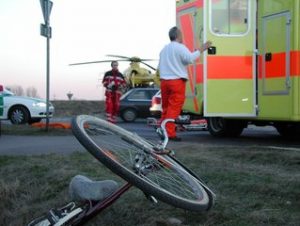 Broward County: A Sunday morning bicycle ride ends in tragedy when a distracted motorist ran into a group of fourteen cyclist pedaling eastbound on State Road 84 near Southwest 148th Avenue. The 33-year female motorist claims to have been distracted by the morning sunlight when her Honda Fit crashed into the group of riders, who were riding in two columns along the right lane of the road. As a result, a 53-year old rider from Weston died from the injuries sustained while another rider, a 62-year old man, is reported in critical condition following the bicycle accident.  Several other bicycle riders were injured but all are reported to be in stable condition. The police are investigating the bicycle accident by analyzing the driver’s cell phone records to determine if negligent use of cell phone was the determining factor that led to the bicycle accident. According to the Davie police officer at the scene of the accident, the female motorists showed no signs of having consumed alcohol or narcotics prior to the crash. The Davie officer also stated the driver had mentioned being distracted and blinded by the early morning sun, which caused her to not see the pack of fourteen bike riders pedaling along Road 84. With only one prior moving violation for speeding, the incident is undergoing further investigation.

City streets and roadways are not designed to provide the best conditions when it comes to safety for cyclists, and many motorists hold absolute disregard for bike riders. Hence, when bike riders and motorists in cities like Hialeah, Homestead, Coral Gables, Davie, or anywhere in Miami-Dade or Broward County, share common spaces, the risk of an accident involving bike riders is extremely high.

Before hopping on your bicycle, take a valuable moment to learn the rules and regulations affecting bicycle riders. Many jurisdictions have rules requiring certain safety equipment and precautions for both the riders and those who share the road.

Following a bicycle accident in Miami-Dade or Broward County, the Perazzo Law Firm recommends you seek medical assistance as soon as possible. Most often, an injury may not manifest itself immediately or in the near future, as some personal injuries, such as cervical damage or brain injury may take several years to show signs of injury. (see Understanding Bicycle Accident Claims)

If you, a family member, or loved one has suffered personal injury from a bicycle accident in Miami, Perazzo Law urges you to contact our Miami or North Miami Beach offices ONLINE or CALL (786) LAWS-411 for a FREE initial consultation to discuss your rights for compensation for injuries suffered as a result of an accident involving a bicycle in Miami-Dade or Broward County.