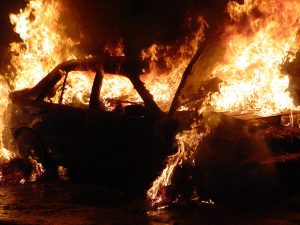 Davie, Florida: A 2016 Tesla S swerved out of control at approximately 90 mph and crashed into a tree, before catching fire and killing its driver, according to preliminary police and eyewitness reports. Though the incident is pending an official and thorough investigation, bystanders that tried to rescue the South Florida man from within the burning car, claimed that they were unable to open its doors and that the airbags had not deployed upon impact. This eyewitness testimony will be key in determining whether or not the man’s life could have been saved had the airbags deployed. The S owner’s manual states that the deployment of the airbag upon impact activates the retractable door handles which allow the car doors to be opened. If the investigation reveals that the airbags did not deploy and that the man died as a result, Tesla may be faced with yet another lawsuit and suffer a devastating economic blow. Even though the man was reported to be doing somewhere between 75 and 90 mph in a 55mph zone, the investigation will also center around what caused the car to lose control, ride over the medium, cut across lanes and slam into a palm tree. The Miami Perazzo Law serves car accident claims that result from defective car parts, faulty airbags, or poor vehicle maintenance service by third party service providers. If you, a friend, or relative has suffered personal injury, property damage, loss of wages, or have been stuck with whopping medical bills as a result of another individual’s negligence, Perazzo Law urges you to contact our Miami or North Miami Beach Office ONLINE today for FREE legal advice.

Though the Tesla brand of electric cars has an almost cult-like following of users, it’s Model S has taken some heavy blows with regards to its credibility as a safe vehicle to drive. Once at the top of customer satisfaction ratings and reviews, it has had to overcome some manufacturing and design flaws that have led to serious personal injury to its user and other motorists and victims. Incidents regarding its unlocking doors have been a concern, as have its faulty airbags and highly flammable batteries, which can take as long as 24 hours to die-out. There have also been issues concerning braking distances, electrical glitches, and concerns of cold weather fronts affecting battery life.  Though Tesla is confident about its user loyalty, there are competitors such as Mercedes Benz, BMW, and Jaguar producing some top quality vehicles eager to take a chunk of the growing electric car market. 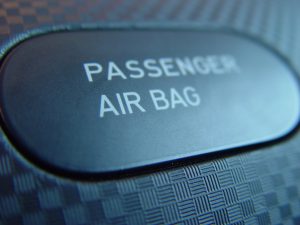 Like seatbelts, airbags are meant to save the lives of motorists and their passengers when involved in car accidents. Car makers like GM, Jeep, Toyota, Nissan, and Ford, Tesla just to name a few, include airbags in their vehicle. In general, airbags have a proven track-record when it comes to lessening the degree of personal injury sustained after a collision.  At high speeds, their deployment may undoubtedly save a driver’s or passenger’s. However, sometimes airbags are deployed for no apparent reason. The effect of the airbags impact with the human face or upper body may result in severe personal injury, such as facial disfigurement such as cuts or a broken nose. More severe injuries can include bodily injuries such as a broken collarbone, spinal-cord injury, or even head trauma in young children and elderly passengers. Regardless, airbag manufacturers, automobile makers, airbag designers, car dealerships, as well as insurance companies may have a legal commitment to make sure airbags are safe and pose no risk of personal injury to those vehicles that contain airbags. See Airbag Claims

If you, a family member, loved one, or an Uber or Lyft passenger has suffered personal injury from a faulty airbag that deployed unjustifiably, or were injured as a result of a faulty car part or manufacturing flaw, the Perazzo Law Firm urges you to CONTACT our Miami or North Miami offices to consult one of our expert personal injury attorneys FREE OF CHARGE about your faulty Airbag personal injury accident claim in Miami-Dade or Broward Counties. See Cities We Serve.